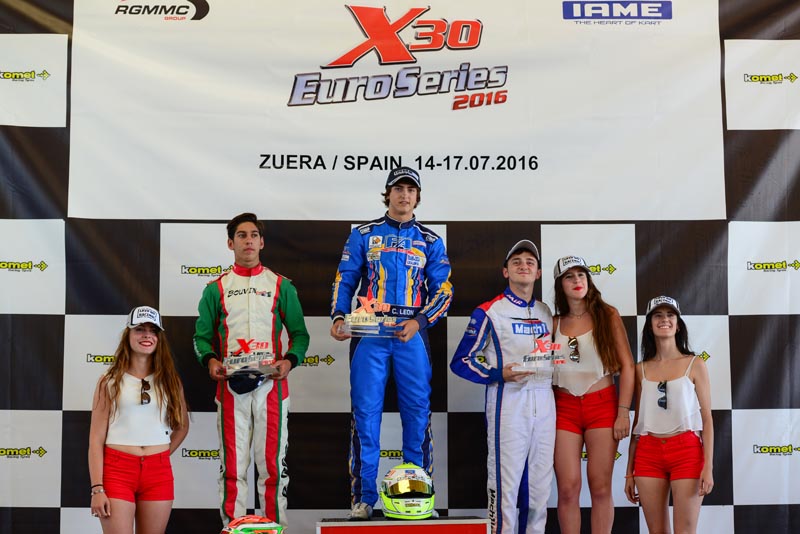 From July 14th to 17th Zuera was venue of the final of the X30 Euro Series, which made history by crowning its first champions ever. Following its successful debut in Castelletto di Branduzzo in Italy the brand and highly prosperous series again welcomed about 50 drivers from almost 20 nations for the second and last stop of the year. The 1.700-metres-long Circuito Internacional de Zuera in Spain’s North, presented some big challenges to the drivers: on the one hand, hot weather demanded physical fitness from the competitors, while on the other hand the track’s special characteristics marked another task: many high-speed passages made the slipstream a decisive factor which determined victory or defeat. Talking about victory, it was not only the race wins, the drivers headed for, but the championship titles! Consequently the tension was high in the categories of X30 Junior, X30 Senior and X30 Super Shifter.

The heats on Saturday mixed up the ranking again. In the end it was Kilian Meyer who conquered the lead. Though not winning a heat, Meyer showed a very solid and consistent performance in all three heats, which was enough to keep his opponents at bay. Title contender Ben Wooldridge (Vital Motorsport) from the UK improved to second place after he had been only in seventh place after the qualifying. Third place went to Chris Lulham who had to compensate a penalty due to unfair driving throughout the heats. Ethan Hawkey (Vital Motorsport) from the UK and Louie Westover followed on fourth and fifth spot before the prefinal.

In the prefinal, pole sitter Kilian Meyer could not tie in with his performance from the heats. After leading the race shortly, he dropped back one position after the other and ended up in sixth place only. On the top, Ben Wooldridge, Chris Lulham and Louie Westover were the pacemakers. The trio pulled away from the rest of the pack, settling the win in the very last lap – or more precisely – on the last metres. Side by side the three drivers crossed the finish line and by a gap of only 0.035 seconds it was Chris Lulham taking the win ahead of his title rival Ben Wooldridge and Louie Westover, who only missed the victory by 0.061 seconds. Fourth place went to Frenchman Milan Petelet (Praga) ahead of Oscar Palomo Ortiz, who in the end both were close at the leader’s heels, too, being separated by less than one second from the race winner.

After a close and thrilling prefinal, the championship was not decided between Lulham and Woodridge and the conditions before the all-decisive final could not have been more exciting. And indeed the spectators should not be disappointed. Ben Wooldridge, Chris Lulham, Louie Westover and Milan Petelet were the protagonists of the race. They pulled away from the rest of the grid and kept changing their positions permanently. Each of them was able to lead the race at least once during the race distance. But due to the leader’s fighting, another group of drivers caught up and stirred up the action. Finally the last lap developed into a real carnage, which Louie Westover mastered best. He took the win closely in front of Oscar Palomo Ortiz and Ethan Hawkey, while the championship contenders – Chris Lulham and Ben Wooldridge – had to be satisfied with seventh and eighth place respectively. Equally this result meant that Lulham took the overall victory in the championship ahead of runner-up Ben Wooldridge and Kilian Meyer in third place.

Although racing at Zuera for the very first time, that handicap did not bother Berkay Besler (Bouvin Power) much. The Turkish driver who headed for Spain as championship leader set the benchmark in the qualifying session. By a time of 1:04.478 minutes he was 0.101 seconds faster than the Spanish drivers Carlos Leon (LTP Competicion) and Mauricio van der Laan (LTP Competicion). Hugo Ellis (Vital Motorsport) from the UK and Taylor Greenfield (PDB Racing) from Peru completed the top five before the heats on Saturday.

The heats did not go according to plan for the pole sitter: Berkay Besler did not call the tune anymore. Mainly a time penalty due to a misaligned front fairing cost him important positions throwing him back to fourth place. On the top Mauricio van der Laan did not leave any doubt. He won all heats thus taking the lead in the intermediate ranking. Behind him his teammate Carlos Leon followed in second place ahead of UK driver Brett Ward (MLC Motorsport). Being the runner-up in the championship table, Ward preserved his chances for the title, which applied to Ellis Hugo who complemented the top five.

Pole Sitter Mauricio van der Laan set the pace in the first laps of the prefinal. But the Spaniard could not keep up the speed and was pushed back a few positions, leaving the lead to his teammate Carlos Leon. But the win was not his to take. After some fighting he dropped back to fifth place behind Frenchman David Beaumann (Jacob Beaumann). Equally the championship contenders Berkay Besler and Brett Ward moved up the order and showed a breath-taking duel on the top. But in the last lap Mauricio van der Laan recovered, caught up and stole the show from the leading duo. By a last minute manoeuvre, Mauricio van der Laan won the prefinal in front of Brett Ward and Berkay Besler who consequently were separated by only one point in the championship table before the big final.

Mauricio van der Laan and Berkay Besler were the driving forces in the final. Both headed away from the grid and arranged the win amongst themselves. While Mauricio van der Laan led the race most of the time, Berkay Besler lurked behind, waiting for a strike towards the end of the race. Equally the chasers closed the gap, which suddenly made the race explode to life for the last two laps. Mauricio van der Laan could not defend the top any longer and ended up in fifth place, while Berkay Besler and Carlos Leon struggled for the win, which closely went to the Spaniard. But the Turk had reason to be happy, as well: he took the triumph in the championship ahead of vice champion Brett Ward, who saw the chequered flag in Zuera in third place.

The gearbox category of the X30 Super Shifter made its debut within the X30 Euro Series. The honour of marking the very first pole position had Constantin Schoell (Daems Racing). The Austrian drove a best time of 1:00.712 minutes and was only a blink of an eye quicker than local hero Gerard Cebrian (LTP Competicion) from Spain who missed the top by only 0.013 seconds. Dutchman Rinus van Kalmthout (RR Racing) proved his all-round skills in karting and managed the third place of the shifters ahead of Belgium’s Frederic Op de Beek (Kart Club Sambrea) and Spain’s and Eduardo Garcia (LTP Competicion).

During the heats pole sitter Constantin Schoell was without luck. He had to retire each of the heats and consequently dropped back the order dramatically. On the other hand Rinus van Kalmthout was in good shape. After a third and a second place, he won the last heat and established himself on top of the heat ranking. Gerard Cebrian celebrated two heat wins but he had to retire in the last race. Yet he gained enough points to finish the day in second spot of the heat’s merge. The Spaniards Eduardo Garcia, Euripidis Hatzistefanis (Daems Racing) and Toni Forne Tomas (Toni Forne Tomas) followed in the chaser’s roles behind.

In the prefinal pole sitter Rinus van Kalmthout did not manage a good start, he lost ground and did not play an important role during the race. Right the opposite applied to Gerard Cebrian who boosted himself into the lead while Eduardo Garcia followed on his heels. Finally Gerard Cebrian did not show any weakness, he took the victory ahead of his teammate who defended his position closely against Constantin Schoell, being the fastest man on track. Frederic Op de Beek and Rinus van Kalmthout followed in fourth and fifth place.

Eduardo Garcia was the man of the final. By a brilliant start, he shot to the front. Lap by lap he was able to enlarge his lead, which he controlled easily up to the finish line. Thus the local hero did not only win the race but took the championship victory on home soil, too. In second place Gerard Cebrian completed the Spanish double success for LTP Competicion. Constantin Schoell made his way onto the podium in third spot ahead of Rinus van Kalmthout and Frederic Op de Beek.

The X30 Super class had already been decided during the round in Italy: Viktor Oberg (PDB Racing) gained the most points which granted him the championship title. Behind the Swedish driver, his teammate Taylor Greenfield completed a double triumph for PDB while Dutchman Rinus van Kalmthout (Daems Racing) took the third place in the overall ranking. 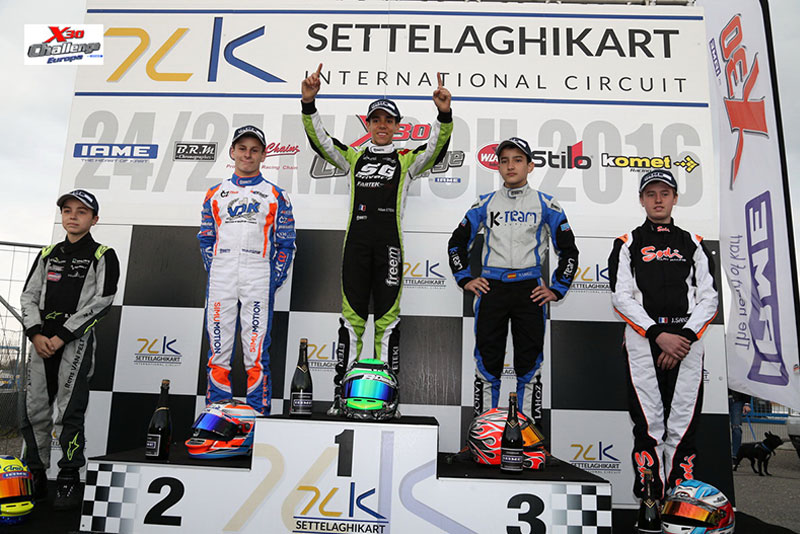